Back in 1981-82 the concept for a specialist financial body to service South Australian councils and prescribed local government bodies evolved primarily from the difficulties many councils experienced in accessing loan funds from traditional financial institutions.

Would the pooling of council’s cash assets (investing) and debenture loan (borrowing) requirements generate a more competitive result for members?  The answer, it was felt, was a resounding yes!

The wheels started to turn….in collaboration with our sister organisations’ Council Purchasing Authority Pty Ltd (CPA) and the Local Government Association of SA (LGA) an officer’s taskforce was formed to investigate the concept of a centralised investment and lending organisation.

Encouraged by the results of the initial investigation, the LGA appointed a working party in 1983 consisting of elected members to further examine the proposal.  Very positive results led to the endorsement, in principle, of the establishment of the Authority at the next Annual General Meeting of the LGA.

Financial viability and legal aspects were investigated and resolved as the working party developed the proposal in concert with State Treasury, the Department of Local Government and external consultants.

Progress was rapid.   A draft Bill was prepared.  A survey of financial transactions by councils was undertaken.  Then following meetings with the Minister of Local Government, Cabinet endorsed the establishment of the Local Government Finance Authority of South Australia.

Having bipartisan support, the Local Government Finance Authority Act of 1983 was passed in December 1983, proclaimed on Australia Day 1984 and we opened for business March 1984.

Due to the success of our first full year’s profit in 1985, the Board decided that supporting members should be rewarded by the declaration of a bonus payment of $100,000.  Every year since then, councils have enjoyed bonuses with the total paid now exceeding $39 million.

Member councils also benefit from LGFA’s financial success via our tax equivalent payment made to local government research and development.

LGFA estimates that South Australian councils have reaped the benefits of direct savings in excess of $300 million since LGFA’s inception, due primarily to our existence in the market place and lower margins achieved. 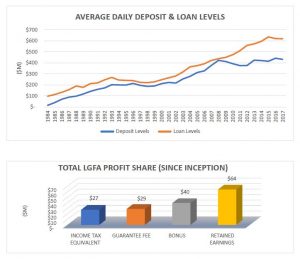 Members
All local authorities are automatically members of the Finance Authority but use of the Authority for investment and loans is entirely voluntary.

Guarantee
In accordance with Section 24 of the Local Government Finance Authority Act, 1983 all the liabilities of the Authority (including monies accepted on deposit from the local authorities) are guaranteed by the Treasurer of South Australia.

Income Tax Equivalents
LGFA makes payments equivalent to company income tax.  The equivalent liability is calculated/applied on an accounting profits basis and the amounts are paid into an account established with the State Treasurer entitled the “Local Government Taxation Equivalents Fund”.  The funds are then available for local government development purposes as recommended by the Local Government Association of South Australia and agreed to by the Minister.

Bonus
The bonus payment is a mechanism which enables the Authority to share its success with member councils and prescribed local government bodies.

Since its introduction in 1985, an amount of $39.7 million has been paid, up to the year ended 30 June 2017. This combined with previous special allocations for local government purposes of $2.8 million will result in overall payments benefiting the local government community of $42.5 million.

In line with past practice, the bonus payment has been calculated to relate to average deposit and loan levels held with the Authority during the course of the financial year.

The more a council uses our financial services, the LARGER their bonus will be.