Since our last update, COVID restrictions have been eased moderately in Victoria and nationally, with the re-opening of borders. Whilst Victoria remains in lockdown, the economic impact of the easing of restrictions for the remainder of Australia has been positive, with evidence in WA suggesting that their economy is back to 90% of capacity. Confidence nationally has improved, having collapsed by 9.5% in August, consumer confidence bounced back in September, rising by 18%. Consumer sentiment is now 1.6% below the average before lockdown in March. 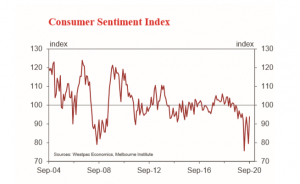 Overseas however, COVID cases have continue to rise. In Scotland restrictions are back in place and new restrictions are expected to be announced for the rest of the UK. In some countries such as Germany and France, they are seeing the highest daily infection rates since April. On the positive side, talk of a vaccine being available in the US as early as March 2021 raises hope that the current international lockdown will eventually come to an end.

In the US, while COVID cases are down from their peaks, the number of active cases remains high, as with the fatality rate.  The US continues to focus on the upcoming election scheduled for 3/11/2020, the US President, whilst recovering from COVID-19, indicating that stimulus talks should be postponed until after the election. This has brought volatility and some uncertainty to the US market.

As a result, global share markets have witnessed volatility in September, after stellar gains posted in August. The news of further lockdowns around the world, the potential impact to these economies and potential delays on US stimulus talks influenced the volatility in equities. However, amidst the bad news, there continues to be a raft of positive economic data, such as lower jobless claims and better than expected US export data, being the highest level since March. This ensured some positivity also remained in share markets. Over September, US equities fell by 4%, Europe by 2% and Australia by 4%.

In China, the recovery post COVID has continued to broaden across the economy. The latest manufacturing reading pointed to the seventh straight month of growth in factory activity and the strongest since March as the economy recovered further from the COVID-19 shock. Initially seen in production and employment, it has further increased to investment and consumer spending. 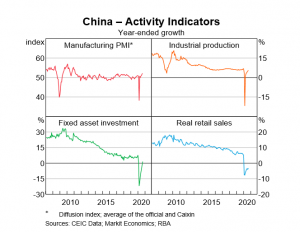 For the Australian market, the key driver through the month was a growing expectation that the RBA would provide more stimulus by lowering the cash rate to 0.10% and potentially purchasing bonds further out the curve (ie 5-10yrs). In its October meeting, the RBA decided to maintain the current cash rate, however there was a strong sign that there will be a move next month. The statement ended with, “The Board continues to consider how additional monetary easing could support jobs as the economy opens up further.”

Another focus in Australia was the eagerly awaited Federal Budget. As expected, the 20/21 deficit is the biggest on record being around 11% of GDP. Whilst JobKeeper and JobSeeker have not been extended beyond March 21, the focus has shifted to JobMaker and JobTrainer with incentives to create new jobs and apprentices for young Australians. Tax cuts were also brought forward but still need to pass the upper house.

A range of other incentives have been provided to encourage investment and the Government appears very optimistic on the success of these measures, anticipating that GDP will be back in positive territory of 3.25% by 21/22. The government has forecasted that the economic stimulus measures will make a 5% difference to the unemployment rate. Current expectation is that unemployment will peak at 8% at the end of 2020 before falling to 6.5% by the end of 21/22.This is all of course dependent of a vaccine being available by the second half of 2021. 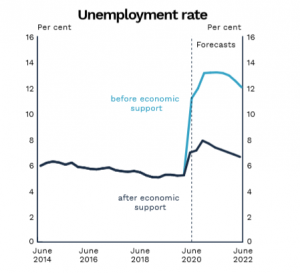 It is clear that the RBA are committed to maintaining low rates as indicated in their statement that they “will maintain highly accommodative policy settings as long as is required and will not increase the cash rate target until progress is being made towards full employment”. Interest rate futures yields continued to move lower in the month to reflect this, and the market consensus is that the RBA will cut rates to 0.10% at its November meeting.