Over October, COVID restrictions in Victoria were eased significantly, and the re-opening of borders continued nationally. While Australia embraced life with no lockdown; for the rest of the world it has been a different story. Throughout Europe, the UK and the USA, COVID cases and fatalities have continued to rise. On the 5th of November, Australia recorded zero community transmission of COVID-19 on the same day the world recorded its second-highest number of new daily cases and the global death toll hit a record. 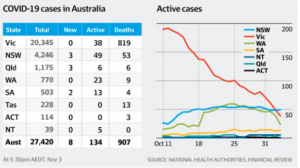 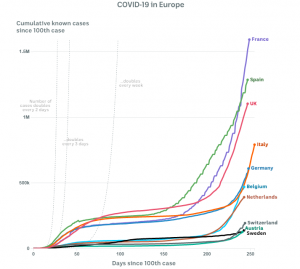 The focus in the US over past weeks has been the US election. With a great deal of uncertainty, markets have been unpredictable. Investors have been spooked by record high coronavirus infections in the US and Europe – threatening economic activity – following announcements of renewed lockdowns. Uncertainty ahead of the US presidential election and a lack of progress on US stimulus negotiations increased market volatility. As a result, US share markets posted their biggest monthly declines since March. Australian equities on the other hand, outperformed, supported by Budget stimulus, rate cut hopes and easing of restrictions.

China continues to lead the charge for a global recovery from the pandemic, with the second-biggest economy seeing growth of 4.9% of the September quarter compared to the same period last year. These figures suggest that China’s recovery is gathering pace, and trade figures for September also point to a strong recovery with exports and imports both growing around 10% compared to the same time last year.

However, tensions between Australia and China continue to worsen. After the initial trigger of Australia calling for an investigation into the origins of COVID, China has made trade decisions clearly reflecting the deteriorating relationship including tariffs on Australian Barley, suspending beef imports and wine dumping accusations that has led to anticipated bans on wine exports to China. Potential reduced Australian exports put some downward pressure on the AUD.

In terms of the Australian economy, consumers have been optimistic with the endorsement of a popular budget and the expectation that the RBA would provide more stimulus by lowering the cash rate to 0.10% and purchasing more bonds. Consumer Sentiment surged by 11.9% in October, to the highest level since July 2018. Despite stage 4 shutdown in Victoria for most of the month, the unemployment rate only increased to 6.9% from 6.8%, the RBA expects this to peak at 8% (rather than 10% expected previously).

On the 4th of November, the RBA cut rates as expected from 0.25% to 0.10%. They also cut the target yield on the 3yr bond rate, the Term Funding Facility and Exchange Settlement balances. Quantitative Easing was also announced as expected, but to a more aggressive level of $100bn. The RBA confirmed that there was the objective of lowering the AUD through lower rates. This will result in the RBA increasing its balance sheet to 27.5% of GDP, from 15%. This compares to the US and the UK at 35%, the ECB at 130% and NZ at 20%. 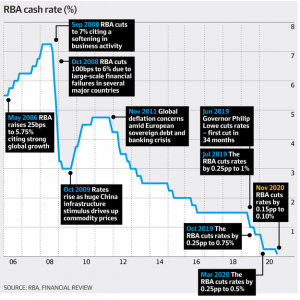 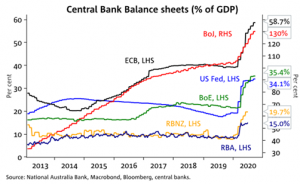