The re-opening of economies due to higher vaccination rates has seen increased demand globally. Australia is now one of the most vaccinated countries in the world against COVID-19. Governments have made a clear ‘pivot’ in focus from case numbers to hospitalisations. Generally, markets globally have been bullish, supported by strong signs of economic recovery and demand for goods and services. However, the threat of a new variant, Omicron that was first reported in South Africa on 24 November 2021 has begun to scare markets. The World Health Organization (WHO) declared Omicron to be a COVID-19 variant of concern based on preliminary evidence that it spreads quickly, and cases have also been detected in several other countries, including Australia. Into December, global markets have adopted a more cautious attitude, as more information is researched with regards to the effectiveness of current vaccines on the strain.

In terms of global focus, inflation has proven to be more persistent and less transitory than originally termed. In fact, on 1 December 2021, US Fed Chair Powell commented that it was time to “retire that word [transitory]” and with “inflation pressures are high” will “consider wrapping up the taper of our asset purchases…perhaps a few months sooner”. Countries around the globe are taking different attitudes to the inherent inflation issues, and whilst many still consider movements as a direct result of supply chain issues and shortages, markets have priced in more policy rate increases than before as they believe that central banks will need to act.

Whilst equity markets continued to witness strength over November, the risk of the new COVID strain has seen markets consolidate sharply. The start of December marked the biggest outflow from equities since April, influenced by worries about the economic impact from the spread of the Omicron variant.

In terms of economic data, the US continues to post high inflation figures. October printed a new 30 year high of 6.2% for the year and three times the FOMC’s medium-term target of 2.0%. However, high prices are starting to have an impact on consumer sentiment, with the rising cost of living and the highest gasoline prices since 2014 being one key culprit, with prices 22% higher over the year. Despite this, economic data continued to show strength. Jobless claims data fell to their lowest level since November 1969, and job ads show the level ads are 52% above pre-pandemic February 2020 levels, at 20-year highs. Markets are now pricing in the possibility of more than two rate hikes in 2022. 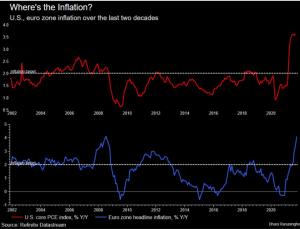 The theme continued in the UK, with much stronger than expected CPI data in October, with the headline rate rising to 4.2%, and the core rate at 3.4% over the year, cementing rate hike expectations. Markets are pricing in a 75% chance of a 0.25% rate hike in December and a further 1% of hikes over the next 12-months. Very similar inflation experiences are being felt in other markets, in Canada, CPI climbed to an 18-year high of 4.7% in October, and the market is pricing in rate hikes of 1.25% over the next 12-months, beginning in March 2022. In New Zealand, the central bank lifted rates for the second time in 2021 to 0.75%, and with a red-hot housing market, continued inflation pressure and a jobless rate at the lowest level in a decade; the RBNZ have signalled an aggressive tightening cycle, to reach 2.50% in 2023 and potentially higher by December 2024

Whilst the economic recovery in Europe continues to accelerate, with October inflation rising to 4.1%, more than twice the central bank’s target, the ECB continues to take a more tentative approach to removing stimulus and any associated discussion of rate hikes. Their latest monetary policy statement reiterated that the first increase in policy rates would not occur until around 2024, and that inflationary pressures are seen as transitory. Despite this, markets are pricing in a rate hike in late 2022.

While the rest of the world are experiencing a rebound in their respective economies, the expectations for growth in the Chinese economy continue to diminish. This has been supported by the Chinese government loosening property rules in a bid to ease the pressure on struggling developers, and the Chinese government have been required to assist construction projects to further support the economy. China has also recorded a significant fall in steel production. Forecasts for Chinese GDP have been downgraded from 9% to 7%. The correction in iron ore prices has fallen as much as 48% over October/November from $125 per metric tonne to a low of $85, however has rebounded in early December to $99. 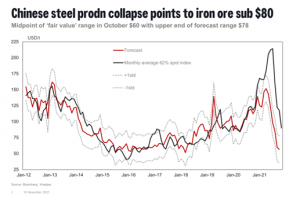 The AUD has seen pressure from the volatility in commodity prices, USD strength, and global contagion fears of the new Omicron variant, falling by 8% over November, and touched below 0.7000 at its lowest level since January 2020. 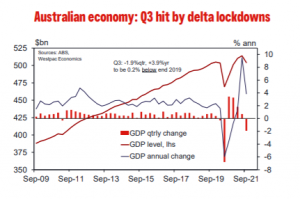 Otherwise locally, economic data continued to print stronger than forecasts. There was a large jump in consumer confidence in October, clearly due to the opening of national borders. Positive employment and participation continue to support the expectation that unemployment is on its way to be below 4% by December 2022, a level consistent with full employment. The RBA continue to highlight that wage growth is required to consider any movement higher in rates, and October illustrated that wages grew by 0.6%, still underperforming economic activity, so this will continue to be closely watched by the RBA and financial markets. Employment has improved and there are evident inflationary pressures. GDP for Q3 was also better than expected, dropping by 1.9% vs an expectation of -2.7%, due to extended lockdowns across the country. The RBA in November has taken its first steps to unwind stimulus, and in the RBA Statement on Monetary Policy, it was recognised the first increase in the cash rate could be sooner than 2024. Markets generally expect rates to start being lifted in 2023, with at least 2-rate rises priced in 2023 to potentially peak at 1.25% in 2024.