Financial markets globally continued to be dominated by worries over rising inflation and a potentially faster pace of central bank tightening, as well as the ongoing war in Ukraine.

Global share markets whilst volatile over the month, were largely flat over May. Worries about monetary tightening to combat inflation driving possible recessions in addition to geopolitical concerns saw weakness in equities throughout the month, however, share market earnings are continuing to publish stronger than expected results which resulted in a bounce back. Over the year equity markets are down as follows, US -16%, Eurozone -15%, Japan -14%, Australia -7% and globally -15%.

Inflation has defied expectations everywhere and has rapidly become the key topic in the developed world, with most inflation-targeting central banks now facing inflation rates above their target range. Central banks around the world have swiftly shifted stance from supportive monetary policy to begin to raise rates in an attempt to reduce inflation towards a target range.

The Organisation for Economic Cooperation and Development (OECD) indicators revealed deteriorating consumer confidence globally. More data indicates slowing demand, with the OECD estimating global GDP will hit 3% in 2022 (a 1.5% downgrade from the previous projections). The OECD also doubled its forecast for inflation among its members (which include the US, Australia, Japan, and Latin American and European nations) to 8.5%, its highest level since 1988.

Growth expectations have been reduced substantially in China, whereby consumers spent considerably less amid strict zero-COVID-19 measures. 25 million residents of Shanghai emerged from lockdown at the start of June, however China’s economy continues to hold risks with increased support from policy makers to attempt to stabilise growth. China’s Premier warned that China was facing a much worse economic situation today than in 2020 when the pandemic began. Whilst it is expected that momentum in China will return, many forecasts for Chinese GDP have been downgraded.

New Zealand and Canada are well into their journey of hiking rates, with Canada lifting rates to 1.50% and New Zealand lifting rates to 2.0% in May. Both Central Banks share the idea that stronger action now will reduce the risk of an even more painful peak in interest rates in the future. More countries appear to be headed in the same direction with above market moves also recently seen in the US, UK, and Australia. Even in Europe, the persistent high inflation is mounting pressure on the European Central Bank (ECB) to remove the significant monetary support and ECB officials have hinted the first interest rate increase may occur as soon as July.

In the UK, headline CPI hit 9.0%, with higher energy prices responsible for most of the increase. Whilst employment remains strong, some areas of the UK economy are seeing weakness with forecast annual growth expected to be flat in Q2 2023 and recent manufacturing index much lower than expected. Business optimism dropped to its lowest level in two years with concerns about costs of doing business and shortages of skilled staff.

Disappointing consumer sentiment is also evident in the US, reaching the lowest level since 2011. Some economic data in the US is starting to show weakness with retail sales in April -11% over the year and US new home sales fell -16% over the month, with the surge in mortgage rates impacting housing activity. Inflation remains stubbornly high, and further aggressive rate hikes are expected with the Fed committee prioritising to move the Fed funds rate to a ‘more neutral policy stance’.

Locally, continued strong data illustrates business conditions are booming and employment is strong, however inflationary pressures have increased sharply. Labour cost growth hit 3%, a record high and the annual pace of wage growth is still the highest since 2018. Despite Consumer Confidence at its lowest level since August 2020, retail sales were stronger in April, and restaurant and café spend was 19% higher than pre-pandemic levels. Australian GDP surprised to the upside in Q1, with an annual increase of 3.3%. 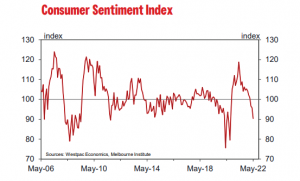 On the 7 June 2022, the RBA hiked rates by 0.50%, surprising most of the market and economists and the first 0.50% hike since February 2000. The RBA cited inflation now seen higher than they expected just a month ago, with pressure coming not just from global forces but also domestic influences such as gas and electricity prices as well as tight labour markets. They also noted that ‘inflation is expected to increase further, but then decline back towards the 2–3 per cent range next year’. The RBA Board also highlighted that more rate hikes will come over coming months. As a result of the more aggressive tightening cycle, many banks have made downward revisions to GDP forecasts and increased cash rate forecasts for the near term. Most major banks believe that the peak cash rate will be around 2.30 – 2.70%, which is still significantly lower than the market’s pricing of 3.50%, with some banks already forecasting rate cuts in the second half of 2023. 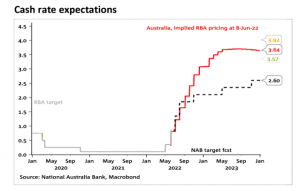 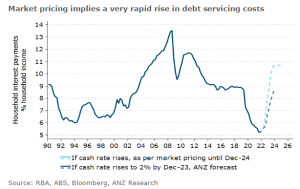