The COVID pandemic continued to be the main media narrative over the past month. The situation for those countries where vaccination roll-outs are moving ahead quickly are seeing evidence of success with fewer cases. However, in developing nations, most notably India – they are now at the forefront of the battle. Locally, the most recent outbreak in Melbourne has highlighted issues with Australia’s slow roll-out of the vaccine, especially in the aged care sector, with evidence showing that only 17% of staff nationally have had their first vaccination.

Global equity markets continued higher over the month of May, another month another gain and continued record levels, as witnessed over the last 6-months. In fact, Australian shares have climbed to new record highs amid optimism over the nation’s economic recovery. Whilst some investors are concerned markets might be over extended, global equities continue to surge higher.

The economic recovery continues to vary significantly across the globe. China, largely virus free continues to see strength, as does the US economic rebound. Europe is finally witnessing some rebound, however some countries are succumbing to a ‘double dip’ recession following lock down measures at the beginning of the year. Italy has showed evidence of a rebound in activity following a positive Q1 GDP result, growing by 0.1% vs an expected contraction of -0.4%. Globally confidence appears supported by continued commitment from governments globally to maintain highly accommodative finance conditions for some time.

In the US, Inflation data surprised materially to the upside and annual inflation leapt to 4.2% for the year. With the opening of sectors of the economy, the cost of leisure activities and accommodation played a part, however the biggest contributor was the increase in used car prices, rising 10% over the month to be up by more than 20% a year ago.

China has continued the theme of economic outperformance after showing the biggest jump in GDP of 18% in April since the inception of record keeping. Chinese inflation jumped to 0.9% in April 2021, the highest reading since September 2020. Their unemployment rate also improved to 5.1%, compared to 5.3% in the previous month and 6.0% in the same period last year.

In Australia, the focus in May was the Federal Budget. Last year’s stimulus spending during COVID represented 5.5% of GDP, and continued stimulus is forecast to see net debt lift from 19.2% in GDP in 2019, to 34% in 2022 and 41% in 2025. This is still well below other developed nations such as the US and the UK that are in the vicinity of 100%. Low interest rates also have meant the cost of servicing debt remains low.

Data throughout May was mixed. After an 11% rise in the previous 3 months, consumer confidence fell in May by 4.8%. However, in context, consumer confidence is still at the second highest level since April 2010. Retail sales declined 0.5%, however remain 4.7% higher over the year.

Employment data was mixed across the states, however the level of employment in Australia is higher than it was before COVID, with unemployment at 5.5%. 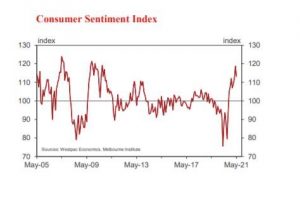 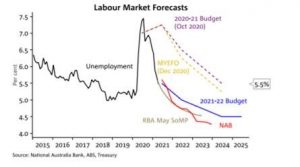 GDP illustrated further recovery, however was lower than expected. Growth was 1.8% for the quarter, and 1.1% over the year. Activity is back above pre-COVID levels, clearly supported by government stimulus. 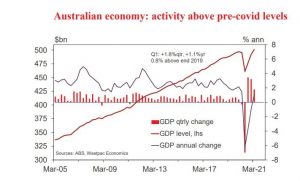 There were no surprises in June’s Reserve Bank Board Meeting. They continue to communicate that current policy settings will be maintained, and whilst the outlook is for strong growth in the global economy, inflation remains low. Again, committing to maintain the highly supportive monetary conditions to support a return to full employment, not expected until 2024. The market is waiting with bated breath for July’s board meeting whereby the RBA will communicate whether there will be an extension in quantitative easing April 2024. Markets are increasingly thinking this is unlikely.