Financial markets continue to be focused on stubbornly high inflation readings, and the prospects of higher interest rates as economies across the globe saw the need for central banks to increase reserve rates to tackle inflation. Volatility continued in markets due to the growing mismatch of rising inflation, slowing economic growth and risks of recession couple with continued energy market instability and geopolitical tensions. The International Monetary Fund (IMF) cut its global growth forecasts while revising global inflation higher which they projected to remain elevated for longer than first anticipated. The IMF noted an “increasingly gloomy and uncertain outlook”, with stalling growth across the US, Euro area and China. Risks to the outlook were “overwhelmingly” tilted to the downside and it cited a plausible scenario that would send the global economy into recession.

Despite this, global equities have witnessed a bounce in risk-appetite, rebounding following substantial falls in the first half of the year. Profit reporting season has provided some positive surprises for markets through July, assisting risk sentiment in equities. Equities rebounded in July, recording a 5% gain, despite volatility and weak data throughout the month.

Developed economies continued the rate hiking cycle that have been in process for some months. Bank of Canada was the first advanced economy central bank to opt for a full 1% rate hike, to 2.5%. In doing so, they said this was front-loading, as they were aiming at avoiding the need for even higher interest rates in the future.

Early in July, China stimulus news assisted positivity in markets, confirming Chinese policymakers’ commitment in boosting stimulus and getting ahead of the headwind from COVID-19 restrictions. Despite this, China’s GDP shrank by a larger than expected -2.6% in Q2, and manufacturing data indicates that COVID restrictions have seen the reduction in activity across the country, providing further evidence that the global economy is slowing.

In the US, weak Q2 GDP data contracted by -0.9%, further evidence of a slowing economy. The negative Q2 GDP print follows a more resounding 1.6% contraction in the U.S. economy in the first three months of 2022. Existing home sales fell over 5% as affordability and market supply continued to restrict activity; and housing starts fell another 3% after a near 12% fall in May. Consumer confidence continued to fall more than expected, currently at a 17-month low. Despite this, the US labour market continued to show strength, with the unemployment rate at 3.6%, its post pandemic low. US inflation continues to be stubbornly high, with headline CPI printing above 9%. The Federal Reserve delivered a 0.75% rate hike, with markets reacting to Chair Powell’s comments of “we’re getting closer to where we need to be” after front-loading hikes, and that future meetings would be more data dependent.

In the UK, the economic outlook is uncertain with the Bank of England (BoE) lifting the cash rate by 0.5% while at the same time forecasting a recession for its economy. They see the UK economy entering a recession in Q4 2022. With headline inflation hitting 9.4% in June, and expectations that it may go as high as 11%, the BoE’s main concern is around extremely elevated inflation, largely due to skyrocketing gas prices. The market is pricing a roughly 80% chance of another 0.5% BoE rate hike in September. In Europe, the European Central Bank also hiked rates by 0.5%, ending their negative interest rate policy which has been in place since 2014. The ECB announced a meeting-by-meeting approach, and the market is now pricing in a chance of a 0.75% hike in September. There is evidence of weak data in Europe also, with a slump of manufacturing data in Germany in addition to falling consumer confidence, reaching the lowest level in over two decades.

Locally, the RBA once again raised the official cash rate in both July and August by 0.50% in each month from 0.85% to 1.85%. The most recent statement repeated that “the board expects to take further steps in the process of normalising monetary conditions over the months ahead” but also added policy “is not a pre-set path”. Housing data has seen some weaknesses, with prices in Melbourne and Sydney down 3-4%, and predictions of up to down 18% over the next two years. Consumer sentiment is also very weak, at levels consistent with major economic disruptions. Business confidence is evaporating – despite strong business conditions, with the economy operating at full capacity.

Another strong jobs report saw the unemployment rate plummeting to 3.5% from 3.9%; a new 48-year low. Australian inflation data came in at 2.1%, bringing the annual rate to 6.1%. Inflation clearly is running hot, currently at its highest quarterly rate since 1990.

Major banks have broadly increased rate hike expectations, reaching a peak between 2.60% – 3.35% by early 2023, with most also now predicting a potential economic slowdown in 2024. 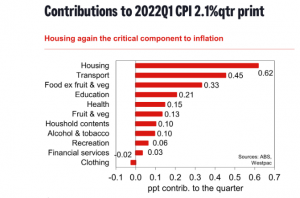 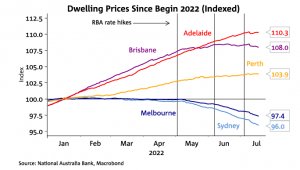 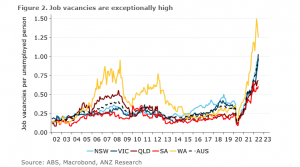