Over January, COVID vaccines continued to be rolled out globally. With currently less than 1% of the global population vaccinated, it is apparent that this will take some time. Continued development and amendments to the vaccine will need to continue as new strains are identified, and as the virus continues to spread. Many countries in Europe continue to be in lockdown, and locally in Australia, border restrictions are unpredictable, making interstate travel difficult. As with the end of 2020, the start of 2021 sees the coronavirus pandemic as the main headline across the world.

Global share markets have had a mixed start to 2021. Influenced by a variety of factors. Sentiment in markets were influenced positively initially with the vaccine rollout, however this quickly turned as a lift in global virus case numbers dampened investors’ appetite. Markets were also spooked by Trump supporters rioting in the United States Capital attempting to prevent the certification of President Biden’s victory. Overall, in January, US markets lost 1% and the Australian market was largely unchanged.

President Biden’s inauguration instilled considerable optimism in the US with regards to fiscal policy, with a commitment of a $1.9 trillion economic stimulus package. US Federal Reserve chair Jerome Powell also confirmed that the accommodative monetary policy stance will remain in place “until the job is well and truly done”, providing some confidence to markets following some negative data over January, including an increase in jobless claims for the US.

In Europe, new cases of COVID-19 remained elevated and continued to stretch medical resources. This has seen authorities act against the virus with more stringent restrictions, extending economic weakness into the first quarter of 2021.

While much of the world’s focus is currently on preventing new waves of coronavirus from stalling the fragile recovery from recession, China’s economy appears quite the opposite. China clearly finished 2020 with considerable strength, activity rising by 6.5% over the 12 months to December despite a near-10% contraction in the first quarter of the year. On a year-average basis, GDP grew 2.3%. A large contributor to this is China’s middle- and upper-income households, despite China’s borders remaining closed, the income and wealth is continuing to be spent on domestic goods and local property investment.

Locally, property investment has also been very strong in Australia.  Australian home values posted another robust gain in January of 0.7%, and are now just 0.4% below their pre-COVID peak and 1.4% below the peak in late 2017. The surge in housing demand following the Home Builders Grants have assisted the lift in dwelling prices. Other data releases through January continued to support a better-than-expected recovery of the Australian economy. The unemployment rate has declined to 6.6%, a full six months ahead of the RBA’s upside scenario. Job vacancies exceeded its pre-pandemic level by almost 12%, suggesting that the budget deficit could improve more quickly than expected. Australia’s headline CPI also surprised to the upside with prices rising by 0.9%, though this has been influenced by government taxes and subsidies that were provided over this time. COVID uncertainties did influence consumer sentiment over January, contributing to a 5% decline, however the index is still 15% higher than a year ago. 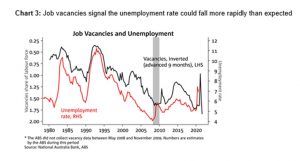 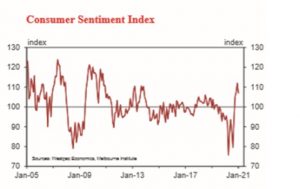 At its February meeting, the RBA maintained the target of 0.10% for the cash rate, as expected. They also decided to purchase an additional $100 billion of bonds issued by the Australian Government, emphasising the need to maintain a very stimulatory policy despite the recent faster than expected recovery. The Board recognised that the outlook of the global economy has improved over recent months due to the development of vaccines. The RBA increased its GDP forecasts, now expected to return to its end 2019 level by the middle of this year. The RBA made it clear that whilst the economy is recovering quicker than expected, highly supportive monetary conditions will be continued until inflationary goals are achieved, and this is not expected until 2024 at the earliest.