The year ended as it began, with the COVID pandemic dominating headlines. 2021 witnessed the successful take-up of vaccines, and the allowance of economies to reopen as part of the ‘living with COVID-19’ stage of the pandemic. However, new variants have made it abundantly clear that the pandemic is far from over, with Omicron driving COVID-19 case numbers to new highs, and worldwide infections hitting a record million cases per day at the end of December 2021. Whilst studies suggest that it is milder than the Delta variant, the Omicron variant is far more contagious, with one case sparking at least three other new infections on average. Countries all over the world, including Australia are reporting the highest ever number of new daily cases. Deaths have not yet risen at the same pace, bringing hope the variant is less lethal. However, the World Health Organization (WHO) has warned that the surge in cases could push health systems towards the brink of collapse. Countries globally are focusing on COVID-19 booster vaccines to provide an extra layer of protection against the virus, and some countries such as Israel have begun rolling out a fourth dose of the vaccine. 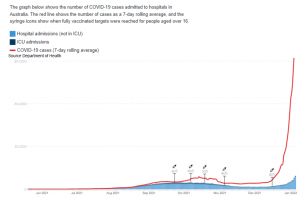 Despite the uncertainty that has been posed by the pandemic, equity markets ended the year with doubled digit returns. 2021 was a remarkable year in many respects, with the stock market turning in another solid performance. Time and again, investors brushed off news that derailed stocks in years past. A pandemic that continues to surprise markets, earnings growth, fiscal stimulus, and inflation readings unlike any seen for many years. In fact, the S&P 500 published 70 ‘all-time highs’ in 2021, gaining over 25% for the year. In Australia, equities delivered over 15% return during the year.
With economies re-opening, central banks and governments have started the process of winding back the extraordinary amount of financial and monetary stimulus. On top of this there is a very real concern about inflation. Countries around the globe are taking different attitudes to the inherent inflation issues, and whilst many still consider movements as a direct result of supply chain issues and shortages, markets have priced in more policy rate increases than before as they believe that central banks will need to act. 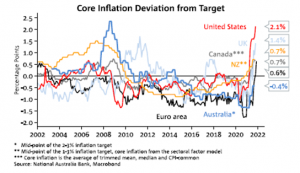 Economic data globally has generally been strong over the month of December. In the US, weekly jobless claims published a post-1969 low, illustrating that firms are increasingly reluctant to let employees go. Headline inflation data rose once again, almost at 40-year highs, rising to 6.8% from 6.2%, and is more than three times the FOMC’s medium-term target of 2.0%. Inflation this high and with no indication that it has peaked will be a concern for the US Federal Reserve. Markets are increasingly pricing in three potential rate rises in 2022.

The UK have already started responding to the strength of their economy, acting against the consensus view for an unchanged rate decision (following the threat of Omicron), and lifted rates from 0.1% to 0.25% in December. In justifying the rate hike, Governor Bailey noted the UK had “a very tight labour market and…more persistent inflation pressures”, with inflation set to reach around 6% next year, much higher than the BoE’s previous 5% forecast. The Bank said further “modest” tightening was likely to be required over the coming years to hit its inflation target, although it acknowledged there were risks on both sides. In Europe, the European Central Bank surprised the market on the hawkish side by indicating that their 1.85 trillion-euro pandemic support program would end in March, however, would add stimulus to another program that would be clarified in March when there is potentially more certainty on the pandemic, the energy crisis and inflation.
In China, the reverse is occurring with growth momentum slowing sharply in 2021 following a V-shaped recovery in 2020. Inflation data is contained at 2.5%, and markets expect that the Chinese economy will maintain stability into the next 12 months. The Chinese government continues to favour fiscal stimulus and potential policy easing in 2022 to encourage the property sector to recover from regulatory tightening on some industries throughout 2021.

Locally, the Australian economy is in very good shape heading into 2022, performing much better than expected throughout 2021. The economy is expected to have grown 4.4% in 2021 (with ‘normal’ growth around 2.5 per cent), and the momentum is expected to continue into 2022. The Australian dollar lost around 6% of its value against the USD over the year, reflecting a stronger greenback rather than a weaker AUD. The lower dollar is providing valuable stimulus for Australian businesses, especially exporters. Employment is strong despite repeated headwinds with lockdowns over the year and the November employment numbers reported the largest singular monthly gain on record going back to 1978. The unemployment rate is 4.6%, the lowest unemployment rate since December 2008, the peak of the mining boom. Household savings has averaged 17% compared to a ‘normal’ 5%, which illustrates some cautiousness of Australian households. Whilst consumer sentiment remains strong, it has contracted slightly with the increased awareness of inflation and a shift in attitude around interest rates remaining low. The Reserve Bank Board meets next on February 1, which will be an important meeting as economic forecasts will be refreshed from November. The Reserve Bank want to see inflation sustainably between 2-3 per cent; unemployment near 4 per cent and wage growth near 3 per cent before lifting interest rates. Many banks are forecasting that this will occur in mid-2023. The market is pricing in up to 2% of hikes over the next 2 years, in contrast to the RBA’s guidance of the first hike not being until 2024 (or late 2023 at the earliest).