News on the coronavirus continued to dominate the media and financial markets over the past month. The roll out of the Pfizer vaccine and other vaccine developments around the globe provided a light at the end of the tunnel. However, as cases continued to grow in some countries, and a new strain identified – proving to be more contagious than the previous strain of the virus, many countries around the globe experienced heightened restrictions at the end of December. Locally, border restrictions were put in place close to Christmas primarily due to community transmission of the virus in Sydney’s northern beaches. Many countries overseas including the UK, France, South Africa, Greece, Bangkok and Thailand all imposed restrictions into the New Year as cases increased in the wake of the end of year holiday period. Whilst the US and Russia have begun vaccination programs, the growth in cases illustrate that the virus is still alive and spreading. In the US, daily cases have been at record levels since early November and there are about 120,000 people in hospital, double the number in either of the two previous waves.

Global share markets have had a remarkable year over 2020. After the COVID pandemic triggered the worst crash in a generation, the news of unprecedented stimulus and vaccine breakthroughs witnessed financial markets back to record highs. Asset prices over December were supported by a more positive global outlook and accommodative monetary policy. World share markets ended 2020 up by 13%.  Locally, the ASX surged 45% after the trough hit in March, and the market closed largely flat over 2020.

China’s economy continued to grow in December, with official manufacturing figures posting its strongest level in 3 years. China’s momentum has continued with the country’s success of keeping the virus at bay. Wealth continues to build and real estate investment in China, highlighted by prices rising by over 10% over the course of the year. It is expected that China GDP will be around 12% higher than 2019, which is astonishing given the headwinds caused by the global pandemic.

Whilst COVID-19 remained the key news theme globally, the month of December highlighted how effective Australia’s response to the pandemic has been to date. The Australian economy has continued to rebound quicker than expected, supporting a promising economic outlook.

Iron ore prices at 7-year highs has provided an additional dividend to national income and supports exports to China, despite the continued news of increasing trade tensions between Australia and China. China has imposed tariffs and restrictions on barley, wine, red meat, cotton, timber, coal and the lobster industry in Australia, and the relationship has hit its lowest point in history. However, the restrictions imposed only make up a small share of overall GDP as more than half of Australia’s exports to China are iron ore. So, whilst this has made an impact to industries, total exports to China have been impacted minimally. 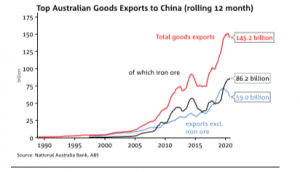 Following the better-than-expected GDP result that was published at the beginning of December, other data in Australia through December has illustrated that the Australian economy is bouncing back.  With the Victorian economy re-opening in November, labour markets continued to improve, with the unemployment rate falling to 6.8% from 7%. Retail Sales posted a stronger than expected 7% jump in November to be up 13.2% over the year. Consumer sentiment has also continued to improve, hitting a 10 year high (with confidence currently at 48% above the low experienced in April, reaching its highest level since October 2010). With regards to business confidence, business conditions jumped to its strongest reading since March 2019 as the economy continued to re-open and due to news of progress in vaccine development and testing. 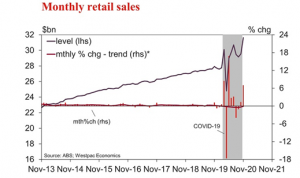 The RBA’s minutes for December emphasised that they are committed to substantial policy support for a considerable period, and expectations for GDP growth and employment were upgraded. It was highlighted that the unprecedented degree of fiscal and monetary policy stimulus since the outbreak of the pandemic had played a key role in supporting the economy. Growth forecasts have been upgraded to reflect the timing of the recovery, with 2020/21, +0.75% (upgraded from -1.5%); 2021/22, 3.5% (moderated from 4.75%); 2022/23, 2.50% (lowered by from 2.75%); and 2023/24, 2.75% (also lowered from 3%). Unemployment is now forecast to peak at 7.5% in March 2021 (lowered from 8%), and major banks have revised forecasts to reflect that the peak of the unemployment rate of 7% has already occurred, and will only improve going forward.