Geopolitical tensions continued to be elevated in April due to the war in Ukraine having no end in sight, continuing sanctions against Russia, ongoing tensions within countries in the G20 and the G6, illustrating that the geopolitical environment is extremely volatile. The World Bank has warned that the war in Ukraine is set to cause the “largest commodity shock” since the 1970s – referencing the 1973 oil embargo.

Whilst most countries are ‘living’ with COVID, China continues to exercise a zero COVID strategy exacerbating global supply chain issues. Reserve banks around the world are reacting to elevated inflation, reflecting higher energy prices, and broader price pressures. Global equities plunged over the month, the largest monthly decline since the start of the pandemic. In the US, the S&P 500 plunged nearly 9 percent, as rising interest rates and high inflation raised concerns about consumer sentiment. Despite the pull back, the Australian share market remains a relative outperformer – thanks to its high exposure to resources shares and the Australian market is virtually flat year to date compared to falls of 10% in US shares, 12% in European shares and 7% in Japanese shares.

Inflationary pressures remain to be the key point of discussion in most economies around the world. However, China’s economy is in stark contrast with its near-term growth momentum appearing to slow sharply. The cities that currently have restrictions comprise of 40% of GDP, and the very real threat of Beijing heading into lockdown will continue to pose risks to any growth targets. It is still very unclear if China will pivot away from its zero-COVID policy and while zero-COVID exists, markets will remain sceptical China can reach its 2022 GDP goal of 5.5%.

In Europe, countries are continuing to see inflationary pressures and manufacturing activity levels remain resilient, with forecasts indicating that activity growth will remain positive in 2022. ECB officials changed their tune over the month, from the picture of ‘no hurry to raise rates’ to starting to edge open the door to a rate rise as soon as July (although there remains to be immense uncertainty to the impact of the Ukraine war). European inflation rose 7.5% in April, with country-based inflation witnessing significant inflation pressures not witnessed in 30 years. Price pressures are showing no signs of disappearing, with confirmation of EU plans to ban Russian crude oil over the next six months, seeing the oil price jump more than 5% on the back of the news. Market pricing sees policy rates getting to positive territory by the end of the year.

In the US, inflation is at 8.5% over the year, the biggest annual gain since 1981. Unemployment is at 4%, the lowest level since 2008. The Federal Reserve has identified that rapid and higher rate hikes are required to combat the issues of high inflation, following in the footsteps of the Bank of Canada and Reserve Bank of New Zealand in lifting its key policy rate by 0.5% at their May meetings. Notably, Fed chair, Jerome Powell, indicated that 0.50% follow-ups are on the table for the next couple of meetings. Markets continue to price aggressive rate hikes for the remainder of 2022, to reach a peak of 3% by mid-2023.

In the UK, they have also continued down the path of rate hikes, with annual inflation hitting a 30 year high of 7% in March as food and energy prices continued to soar. Markets are expecting the Bank of England to impose its fourth-rate hike in a row at its May meeting, despite plunging consumer confidence and fears of a slowdown of economic growth because of high energy prices due to the invasion of Ukraine.

In Australia, the most notable data throughout the month was the inflation data in Australia, rising beyond many banks forecasts with the annual rate surging to 5.1%, the trimmed mean (RBA’s preferred measure) rising sharply to 3.7% and clearly well above their 2-3% target band. This is the first time that inflation has printed above the target band since 2010. Despite lower consumer sentiment figures, the reality of a very low unemployment rate, high job ad levels, a shockingly high inflation outcome, it became impossible for the RBA to follow its plan of waiting for wage figures before normalising interest rates. 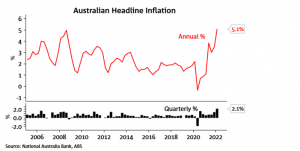 As a result, the Reserve Bank of Australia hiked rates for the first time in 11 years at its May board meeting by 0.25%, the cash rate is now 0.35%, up from the historic low 0.1% which had been the official interest rate since November 2020. The RBA noted the resilient economy and outlined that it was time to withdraw some of the extraordinary monetary support that was put in place to help the Australian economy during the pandemic.

It was noted that there will be a requirement for a further lift in interest rates in the future, as the RBA attempts to bring inflation back to target. As a result of the messaging, many banks have revised cash rate targets, with the broad expectation of further aggressive rate hikes in 2022, to reach a peak between 1.50%-2.25% by mid-June 2023. This is significantly lower than the market pricing of a peak cash rate of 3.25% by June 2023. 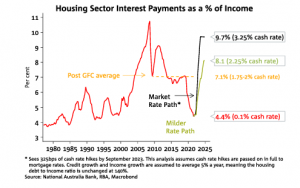