The success of vaccine rollouts across the western world has seen a continued improvement in market confidence, evident by strong consumer data. India, on the other hand is witnessing a significant spread of the infection, becoming the first country to report more than 400,000 new cases in a single day. Despite being the world’s biggest producer of the vaccines, the country is suffering an internal shortage. Many countries have closed their borders to India, even for citizens returning home. Hospitals throughout the country have been suffering from shortages of oxygen and beds.

There continues to be a stark divergence between how countries deal with the spread of infection and vaccine rollouts. While the US and UK are forging ahead at an impressive pace, the Eurozone is battling with supply constraints. Australia’s rollout has fallen short of expectations to date, but officials are hopeful for increased vaccine supply and higher level of participation over coming months. COVID has clearly had an impact with recent research showing locally that around 6 in 10 Australians have either stopped visiting their CBD or are visiting less.

Equity markets continue to climb, with the S&P up 11% for the year. The ASX witnessed the seventh month of gains in a row, a streak not seen since 2019. With this rally in the first four months of 2021, investors are wary that this is a sign that markets might be over extended.

Strong key US data highlighted a solid rebound in the US economy. Fiscal spending, and the re-opening of the economy has boosted consumer confidence and supported a strong rebound in spending, with household consumption posting an 11% gain in Q1. There has been an impressive surge in employment, a clear relation between the rapid decline in COVID-19 cases and the swift deployment of vaccines having a significant impact on activity across the economy. Inflation readings in the US printed higher than expected, with Core CPI up by 0.3% over the first quarter of 2021, the most in seven months. However, markets took the stronger than expected inflation data in its stride, following the Fed’s rationale that the lift in prices may only be transitory. Global interest rates retraced from the post pandemic yield highs whilst the market waits for more confirmation that this rebound can be sustained. 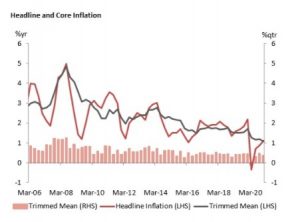 On the flip side, Europe continues to face headwinds. Extended lockdowns; rising case counts; and an underwhelming vaccine rollout have played a part in reducing demand in the first quarter. European GDP data confirmed the recession with Q1 GDP -0.6%. With the vaccination programme back on track in the region and restrictions likely to ease, Q2 is expected to be much better. 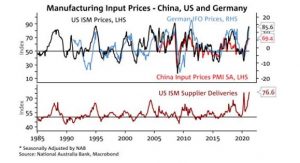 April was a mixed month in terms of data for Australia. Business and consumer confidence remain high, with sentiment index reaching its highest level since August 2010 when Australia’s post-GFC rebound and mining boom were in full swing. Employment data was again very strong in April, +70k (versus market median of 35k), with the unemployment rate falling to 5.6% (from 5.8%). However, inflation data disappointed, increasing by 0.6% over the first quarter of 2021 (versus an expected 1% rise) resulting in a year on year increase of only 1.1%. Government assistance for housing in addition to lower food and domestic travel prices contributed to the weakness. 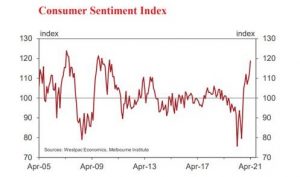 Housing demand continues to increase, and whilst the pace of house price gains slowed in April, rising 1.9%, down from 2.7% in March; it is still the third largest rise recorded since the late 1980s, suggesting momentum remains strong. While prices are only 6% above year-ago levels, this understates the momentum in the market, with prices up more than 7% since December.

Major banks expect the Australian economy to expand by a well above trend of 4.5%.in 2021, and 3% in 2022. In line with the views of central banks globally, rate hikes in Australia continue to be some way off, with the RBA remaining committed to its bond buying program and low rates until there is “progress towards the goals of full employment and inflation targets” which is not expected to be met until 2024 at the earliest.