The economic impact of COVID-related restrictions from the initial pandemic wave are now being reported in Q2 figures.  Data is patchy at best – with some sectors experiencing more pain than others, service-related industries have been bearing the brunt as a direct result of the shut downs across the globe. Like Australia, many other countries have seen evidence of a second wave of infections. In Europe, whilst case numbers have increased, the number of fatalities has remained low as health systems are more prepared, bringing some confidence into the market. The US continues to report the greatest mortalities, as at the end of August 6.2M cases and 188k deaths. Locally, reported cases in Victoria appear to have passed their peak, with inter-border restrictions beginning to be loosened across the country. 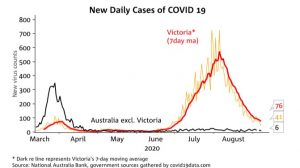 Global sharemarkets continue to shrug off negative economic news with equities performing well. US equities are up by another 7%, the biggest 5-month percent gain since July 2009, up by 30%.  On the flipside, US gross domestic product (GDP) decreased by -9.5% in Q2. The unemployment rate actually fell by 1% to 10% (illustrating the impact of US relief packages pausing the search for employment). Markets are obviously searching for optimism with US 10-year treasury bond yields increasing over the course of the month by 0.18%. The USD has seen the brunt of the negativity seeing its longest run of losses since 2017 following the new Fed policy framework confirming that ‘downward risks to employment and inflation risks have increased due to the pandemic’, weighing on investors moods.

Looking to Europe, GDP contracted in Q2 by -12%, the biggest contraction on record, with the unemployment rate for the region rising to 8%. Across in the UK, following the significant GDP fall of -20.4% for Q2 reported in July, retail sales have actually bounced and unemployment remained at 3.9%, unchanged from the previous period.

Through the varied economic data globally, the one region that seems to be bouncing back more than any other country is China. In the March quarter, China’s economy was hit particularly hard with the restrictions associated with COVID. In that period, GDP contracted by a staggering -10%. But three months later, there has been an equally striking +11.5% GDP reported for the June quarter. 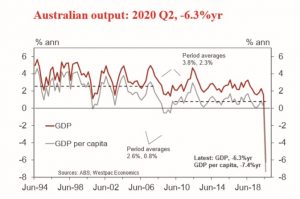 Much like the rest of the world, the Australian economy has been broadly weaker and reported its first negative GDP number since 1991 and the biggest recession since WW2. The larger than expected -7% contraction in economic activity was driven largely by the private sector, much of which were restricted due to efforts to contain the pandemic. For Australia, a -12% contraction in consumer spending explains 98% of the overall contraction in GDP. Unemployment has continued to edge up to 7.5%. The RBA has predicted the unemployment rate to peak at 10% as the Job Keeper and Job Seeker subsidies start to unwind. 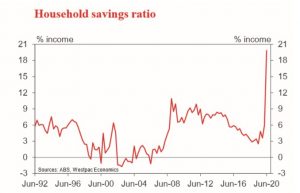 The Australian growth outlook for the remainder of the year will be dependent on the success that Federal and State governments have containing the virus, with market expectations of GDP not expected to pick up to pre-pandemic levels until 2023. Interestingly, with the collapse in spending, household savings rates have soared to 19.8% from 6% in the March quarter. Over the month, the Australian dollar and equities locally have continued to bounce back. Investors continue to look for any potential ‘good’ news, reacting positively to any vaccine news. The Australian share market has clawed back 25% of the 40% fall in March. The AUD has continued to benefit on the back of a weaker USD and at the beginning of September touched 0.7400, levels not seen since May 2018.

The RBA met in September and made no change to the cash rate, however, they increased the size of their term funding facility and continued to commit to holding the 3-year government bonds at 0.25%. It was noted that an uneven recovery is under way after the severe contraction in the first half of 2020. Business conditions remain restricted as the Australian economy is experiencing the biggest contraction since the 1930s and the economy is being supported by the substantial unprecedented monetary policy easing and fiscal policy stimulus. The RBA committed to keep the cash rate current levels until progress is being made towards ‘full employment’ (predicted at 4-5%). However, the Australian economic contraction is still mild in comparison to many countries internationally.