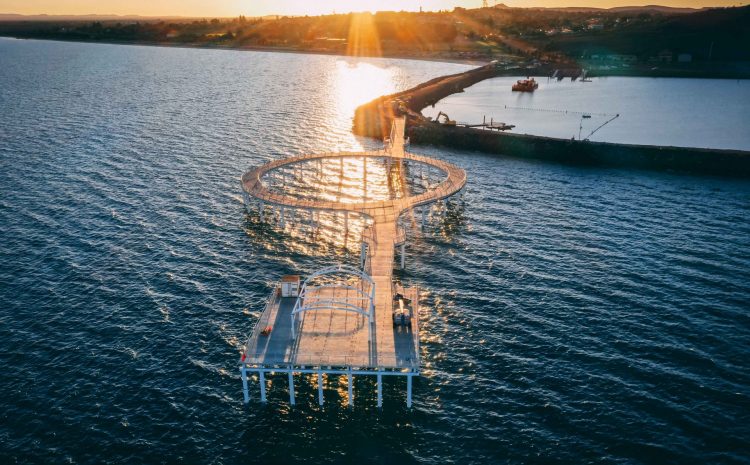 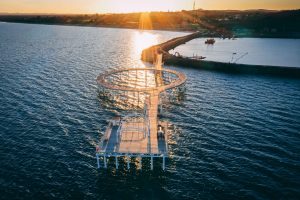 While 2020 has been a year of challenges, in Whyalla there has been a growing sense of excitement as a new, uniquely designed jetty slowly comes to life.

The once-in-a-generation jetty includes a loop in its design that is unique to Australia and will provide an iconic experience for fishers, walkers and sightseers to enjoy.

The new jetty came about after the previous jetty, originally constructed in 1975, became subject to prohibition and improvement notices from SafeWork SA in March 2017 and was subsequently demolished.

The old Whyalla jetty was a joint venture between the Rotary club and the Whyalla Angling club, with construction undertaken by the Broken Hill Proprietary Limited (BHP).

Early in 2017, after concerns with the condition of the Whyalla jetty were raised, staff addressed some remedial works as requested by Safe Work SA and sought a condition assessment.

In February 2017, after receiving an inspection report in relation to the Whyalla jetty which identified significant structural issues, Council closed the jetty and subsequently resolved to replace it.

It became clear that within the community there was an understanding of the importance of the jetty in terms of visitation and tourism; and a great deal of attachment, love of, commitment to and support for a new jetty.

The design was chosen by the community as the preferred option and was overwhelmingly popular, with the circle considered a real point of difference.

The project was approved by the Traditional Barngarla Owners of the land who assisted in the construction process to protect the environment.

Demolition work on the old jetty began 11 September 2019 and the first piles for the new jetty were driven on 22 October 2019.

Over the shape of this year, locals have watched as the jetty has taken shape and its bold, clean lines, impressive structure and unique design make it an unmissable feature of the Whyalla foreshore.

The new jetty is 165m long, 38m longer than the old one. When you add in the circumference of the loop there is a further 150m of walking distance and in total the jetty is approximately 315m long.

It is made of industrial strength pre-cast concrete slabs suitable for marine environments. High strength fibre reinforcements were selected rather than steel which helps to reduce the possible rusting components that are highly susceptible to the marine environment, this is how the jetty achieves its 80-year life.

The sides of the jetty are a combination of steel mesh to act as a wind break, and open sections for children and disabled viewing and fishing areas. The entire jetty has brushed steel balustrade which is a design and safety feature.

Bespoke lighting has been installed inside the top handrail with each 500mm of handrail having a 50mm LED pod around the entire length of interior and exterior balustrade.

Disabled access is a key design element with egress to the jetty gained through a 45m access ramp built to Australia standards. Open sections of the jetty have been allowed for children and people in wheelchairs to admire the view. Also, there are 6 locations around the exterior of the jetty that have sliding sleeves on the top handrail sections for children or the disabled to fish from.

All the steel used on the jetty comes from our local supplier GFG, except for the pylons since GFG do not manufacture round tubes. The steel from the old jetty was recycled back through GFG’s Basic Oxygen Steelmaking (BOS) furnace.

The budget for this jetty design was $7.8 million dollars. The State Government contributed $1.0 million and GFG donated $300k of steel, with council contributing the remaining $6.5 million.

Built by Maritime Constructions, which is based in Port Adelaide, the jetty continued construction throughout the COVID-19 restrictions, and has finished on time, and on budget.

This information was provided by Jenny Barnes, Media Liaison Officer, City of Whyalla