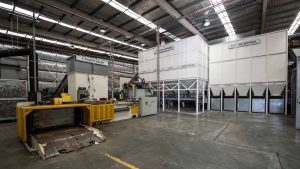 The NAWMA Materials Recovery Facility (MRF) is a recycling plant delivering local outcomes of global importance with significant environmental, economic and social benefits for current and future generations. The MRF is a credit to the NAWMA technical working group, board and constituent councils of Salisbury, Playford and Gawler. The 30,000 tonnes per/annum recycling plant represents not only excellence in environmental leadership, but testament to councils working collaboratively as a regional waste management subsidiary to deliver economies of scale and efficiencies in service and infrastructure delivery.

One of only two large scale MRF’s operating in SA, and the only one owned and operated by local government, the MRF is a state of the art facility for sorting household recycling bins. Balancing innovation and technology with localised employment opportunities, the MRF is meeting its’ key performance criteria for diverting approximately 2500 tonnes per month from landfill, while realising a multimillion dollar revenue stream from the sale of quality sorted paper, glass, plastic, steel and aluminium into local and international markets.

NAWMA’s key performance criteria is to reduce the amount of material being sent to landfill, while our strategic intent is governed by principles of circular economy, advanced manufacturing and secondary remanufacturing, under a lens of innovation. Long gone are the days of viewing these types of facilities as a waste management tool, rather, NAWMA’s MRF is a leader in resource recovery infrastructure of state significant importance.

Implementing a strategy direction of vertical integration, the NAWMA board and management set about delivering a vision of running South Australia’s newest and most technologically advanced MRF. The planning commenced in 2013, and after various iterations of design, specification and location, the development application was approved in July 2017. The culmination was an investment of $8.05 million by the constituent councils.

Most notably, the plant has been designed to future proof NAWMA, and more broadly, South Australia. A single shift five workday operation dutifully processes the current 30,000 tonnes per annum delivered by NAWMA constituent and client councils, and rural and regional council customers. However, the operation has capacity to run 24/7, and could process up to 90,000 tonnes per annum if required.

The result of this project has been transformational for NAWMA, and the constituent councils, but also more broadly for the northern precinct and South Australia in general. The development of this state of the art facility has doubled the recyclables processing capacity in South Australia, resulting in more yellow top bin recyclables being processed locally and supporting the South Australian recycling industry.

Operationally, the MRF and has sorted approximately 25,000 tonnes in its’ first ten months of operation, producing high quality finished goods such as paper, plastics, glass, aluminium and steel, which are marketed locally in Australia and internationally. Pointing to the success of the design, construction and operation of the MRF. Housed inside a large purpose-modified industrial building of some 3800 sqm, the MRF is a combination of trommels, magnets, eddy-currents, ballistic separators, and manual picking stations, fed by almost half a kilometre of conveyor belts. It is an entirely impressive plant, that is fronted by NAWMA’s corporate administration office, boardroom and environmental education centre.

Economically, the MRF provides a significant revenue stream for NAWMA’s constituent councils, while reducing exposure to the often-fickle commercial recycling industry. Most importantly, the MRF provided nineteen full time jobs in northern Adelaide at the same time as Holden was closing. The generation of full time employment in advanced manufacturing at such a historic moment in South Australian manufacturing was not lost on Minister Hunter when he officially opened the facility on 06 October 2017.

In terms of tonnes per hour, and a “basket of goods” revenue stream, the MRF is a business leader for NAWMA. It drives the way we communicate with our community and councils, as everything we do is prefaced with how to get more material into the MRF and out of landfill. NAWMA’s “cost of doing business” is far less in the MRF than it is in our landfill stream, and therefore it is an economic leader as well as an environmental one. The new state of the art MRF has proven that NAWMA can couple environmental leadership with economic development.

NAWMA’s management team have “opened the doors” to the recycling industry to better educate councils and the community on every aspect of the complex operation. From the importance of lower contamination in the yellow top bin, to the use of high tech ballistic separators to sort out the paper and cardboard, down to the finished goods that are loaded into a purpose-built loading dock and following the shipping containers to outer harbour ready for their journey to both local and international markets.

This information was provided by Amy Quintrell, Executive Assistant, NAWMA

LGFA provided NAWMA with flexible loan funding facilities which were used during the construction of the facility.