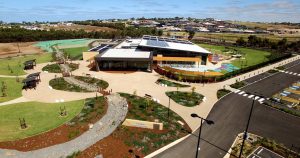 The Fleurieu Regional Aquatic Centre Authority (the Authority), is a regional subsidiary established under Section 43 of the Local Government Act 1999 by its Constituent Councils; City of Victor Harbor and Alexandrina Council. The Authority was established in August 2015 to enable joint ownership and management of the Aquatic Centre.

After decades of investigations and planning, followed by a 21 month construction period, the communities’ dream of an aquatic facility on the Fleurieu Peninsula’s South Coast was realised in March 2017.

The $21 million project was a joint initiative of the City of Victor Harbor and Alexandrina Council, with funding support from the Australian Government and State Government’s Community, Recreation and Sport Facilities Program; and a generous land donation from Beyond Today.

The two councils worked tirelessly together with the community and key stakeholders to deliver this high-quality facility on time and on budget, and are justifiably proud of what they have achieved.

The community played a significant role in the development of the Fleurieu Aquatic Centre project, with extensive community consultation undertaken between 2001 and 2013. In 2013 the Alexandrina and Victor Harbor communities were provided with an opportunity to consider concept plans for the Fleurieu Aquatic Centre and the financial commitment required to deliver the project.

In addition to this consultation, a Community Reference Group was established in 2014 to provide input into the functionality and operations of the Aquatic Centre. This was made up of 17 community members across the two councils from local schools, swim school providers, allied health care providers, retirement facilities, childcare providers, sporting clubs and other community groups.

The Fleurieu Aquatic Centre is located on the councils’ boundary at the corner of Waterport Road and Ocean Road in Hayborough, and includes the following facilities:

“The Fleurieu Aquatic Centre project is proof that councils can consider their communities’ needs at a regional level. An investment of $6.5 million by one council would not procure much in the way of major new infrastructure, but together $13 million leveraged significant grant funding to make a $21 million project possible” said Mayors Keith Parkes and Graham Philip.

“Our councils are extremely proud to have brought the Fleurieu Aquatic Centre Project to fruition to provide huge benefits to our communities. It is not common for councils to build major infrastructure together. This project has shown it is not only possible but the results can exceed expectations. The outstanding teamwork and unique collaboration between the two councils is reflected in the project’s success.”

LGFA provided both Councils with flexible loan funding facilities which were used during the construction of the facility.