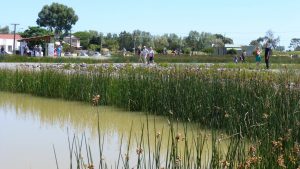 The City of Charles Sturt, together with the South Australian (SA) and Federal Government, has officially completed and opened the Water Proofing the West – Stage One Project. The Project is unique, an integrated water sensitive urban design solution to the challenges associated with stormwater management, stormwater quality improvement, flood management and water supply management in a fully developed urban environment.

Water Proofing the West is a major initiative by the City of Charles Sturt with combined expenditure of $71.5 million.

The Council worked with SA businesses to design and construct the works and the Project is a leading example of the range of skills and water expertise in South Australia.

Stormwater management and flood mitigation has been one of the most significant issues facing the City of Charles Sturt. Many suburbs in this City have a long history of flooding because the land is so flat and close to sea level. In addition to flood risk the drought conditions commencing in 2003 with Level 3 water restrictions saw many Council reserves and natural vegetation areas deteriorate and many displaying extreme stress. There has been growing strong community concern that significant trees are dying and many of Council’s shrubs and reserves browned off and were dying.

The City of Charles Sturt developed the Water Proofing the West – Stage One Project with the primary objectives of flood mitigation and stormwater reuse, within a highly urbanised area. The Project harvests up to 2,400 ML per annum, treats and stores water in rock aquifers and subsequently distributes the water through 36 kilometres of mains. The Project links water assets in two stormwater catchments and has approximately 11 Hectares of wetlands across four sites, and enhances water harvesting with the capture of excess River Torrens water, which would otherwise be discharged to sea.

“Some of the benefits of the project include reducing the flood risks, reducing the use of mains water and our reliance on the River Murray, harvesting excess water and reducing the outfall to the Gulf of St Vincent of water laden with fertilizer trace elements, oils and general rubbish that damages the sea grass environment. We have now found a more affordable water source to irrigate Council areas creating greener and more useful open spaces, and by undergrounding powerlines we have improved the look and feel of Old Port Road,” Mayor Angela Evans said.

The City of Charles Sturt Project has received awards from across industry sectors including the Local Government Managers Association, Stormwater South Australia, and the Stormwater Industry Association.

This Project has a combined expenditure of $71.5 million and is a collaborative funding project with nine funding partners from all three tiers of Government, a private land developer and the support of the West Lakes Golf Club.

One of these funding partners has been the Local Government Finance Authority (LGFA) who provided a flexible funding solution through LGFA’s Convertible Cash Advance Debenture product.